Rainbow Glitter Slime Maker lets you make a wide variety of Glitter Slime in the form of Rainbows, Unicorns, or just plain old fashioned gooey slime for the entire family!

Get your ingredients on the table and get ready to get super messy with rainbow slime!

Combine the ingredients in the pan, and mix them all together!

Put your rainbow slime on the table, and start stretching, poking, and kneading it out, until it’s nice and gooey!

Rainbow Glitter Slime Maker is great fun for all ages, especially those that love DIY projects, and gooey slime games!
Make Rainbow Slime in your very own Kitchen with a variety of Slime Making Lessons, and voice overs for helpful guidance! 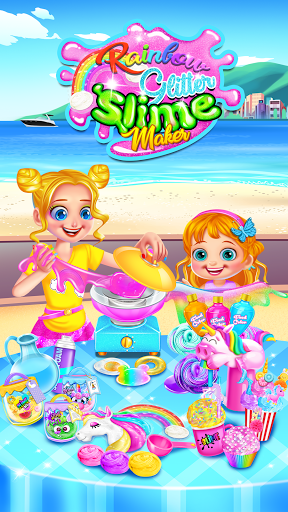