Game Information of Rise of Warlords

Five mythological systems, hundreds of legendary heroes, and only one victory.

Every kingdom rises because of a king renowned for his sagacity. In this new World War, the six civilizations fight for supremacy and survival, and people pray to the gods to end the chaos.
As the chosen one, can you end this epic battle and conquer the continent? Or explore new continents to rebuild your civilization?
What is your choice?
Power comes from strategy, not money.

Game Features
Real-Time strategy game
All battles that take place on the map are in real time. You can freely move troops to join or leave a battle, allowing you to use strategy rather than just simply sending troops and waiting for the battle to end. You can flank enemies, intercept their supplies, or work with allies to surround your enemies.

4 unique kingdoms each with their own features.
Choose a kingdom to begin your conquest, take advantage of their unique features and terrain, expand your influence and march to Olympus.

3D world
Everything you do happens on a giant 3D world covering an area of 2,250,000 square acres. You can view the entire world without having to wait for any loading screens. The map is covered with a huge variety of realistic terrain, huge mountain ridges, and rivers that converge and flow to the ocean.

Alliance
You can help out each other by using various alliance features: Set up different posts to manage up to hundreds of members, leave markers on the map to show members where objectives are. Arrange members into different squads to perform different strategic missions. Alliances can capture the tallest building in each kingdom to gain advantages in tactics and strategy, and provide extra resource production bonuses for members.

Flexible troop maneuvering
Give commands to your troops at any time, and take your troops anywhere you want. Control the troops for large-scale expeditions, and position your troops into ambush locations to surprise the enemy. You can even use fortifications near your city to increase your defense.

Conquer the world
Work with your allies to capture the capital and build a unique kingdom of your own. Defeat all your competitors and seize the throne, then capture the Center of the world- the Pantheon, become the only one to conquer whole world, your name and your kingdom will be etched into the annals of history. 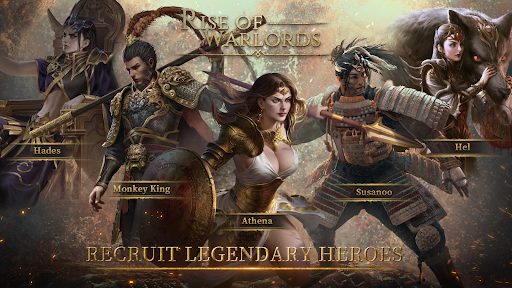 Related Posts of Rise of Warlords